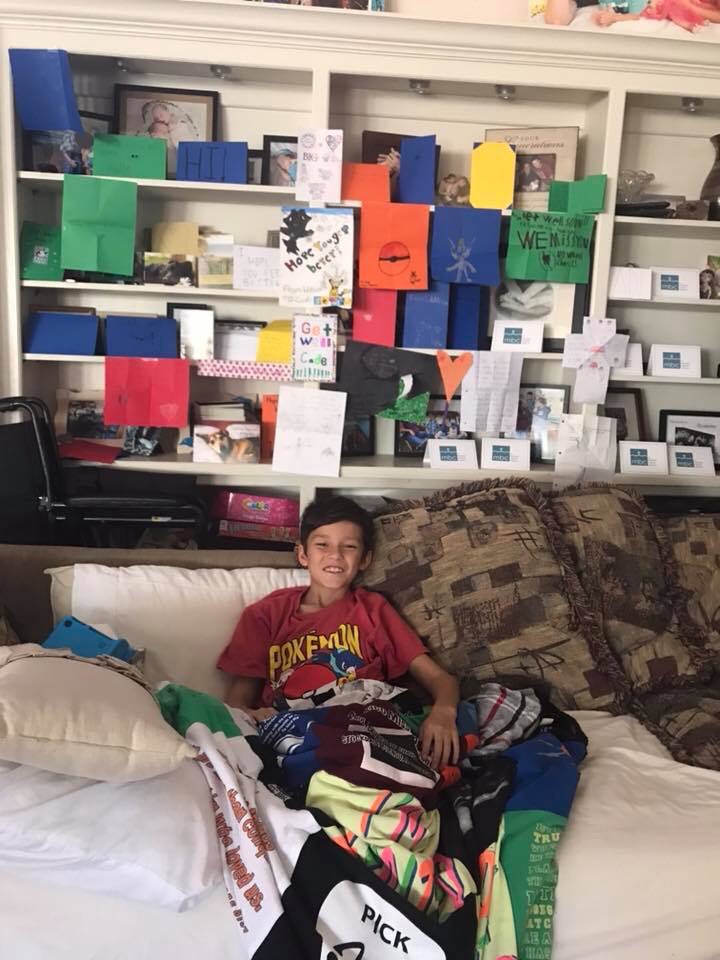 Mike and Debbie’s grandson
From Debbie:
Cade Greathouse
He was diagnosed with HSP Henoch-Schönlein purpura. It is a disease that usually attacks children ages 2-13. Mostly boys, but girls too. It usually follows a round of flu or strep throat. His body still thinks it’s fighting mucous…so it’s basically fighting against itself (auto immune). His joints swell as tiny capillaries leak in different areas causing a rash in different parts of his body every day. We have noticed that the rash and swelling manifest in the areas most stressed the day before. If he walks his feet hurt. If he pushes up using shoulders or elbows pain lands there. Played with a Rubik’s Cube one day…the next his arms and wrists hurt etc. He struggles to eat because we are trying to limit inflammatory foods….so we can’t tempt him with his favorites, although we try to duplicate them they don’t quite taste the same. During the first 10 days the swelling and pain was unbearable. The next 3+ days were excruciating…he couldn’t keep anything down and threw up 4-5 times a day with an empty stomach. One night he threw up about 10 times with only water going into his system. We took him to get an IV to rehydrate which helped him rebound for a couple of days. They also gave him steroids for pain. They don’t recommend hospital stays with HSP. It’s a disease that will heal itself over time. Steroids help some, but aren’t recommended long term. Only Tylenol or Arnica have helped some with a lot of oils like Cobiaba, Deep Relief, Tummygize, Peace & Calming. It just has to run its course. They say usually 4-6 weeks. We begin week 4 today. He is waking up refreshed most mornings with usually one bout of pain in the middle of the night right now, so much improved. His days are still limited to the couch resting. Someone has to carry or wheelchair him to the bathroom. During the first few days he couldn’t walk or move his arms and hands/fingers. He has lost much weight and muscle tone. So ready to see a little meat on his bones again. Cade is the best patient in the world. He is a real trooper even when dealing with all his pain. God has been with us every step of the way from obtaining a diagnosis to this rare condition, to learning how to keep him as comfortable as possible. Prayers are still coveted. Their church has provided meals almost every day for two weeks. Overwhelming love and care….his classmates miss him at school and have come for visits usually bearing gifts. We hope the end of this illness is just around the corner.