I hope your summer is off to a great start! Donna and I were able to take a couple of days and go to her family reunion in Arkansas. The beauty there reminds me of how much our God loves us! It was good to reconnect with family that we seldom get to see.

It is with deep sadness that I announce the passing of Neal Marshall. I met Neal through a weekly bible study at Johnny’s BBQ in Odessa. Neal had already battled cancer for some time when I met him a few years ago. He was one of the most gracious and kind Christian men that I have ever met. Donna and I visited him at the hospital one time and sang “How Great Thou Art”. He laid there with big tears rolling down his face. A short time later he called me and asked if we would sing this song at his funeral some day. I told him we would be honored. On Wednesday, May 31st, Gary Whitehead called and shared the news that Neal had gone home. Amy Jo, Neal’s sweet wife, had asked Gary to call me. Sadly, we were unable to be there because we were headed to a family reunion. I will miss my friend,Neal Marshall. Rest In Peace brother! 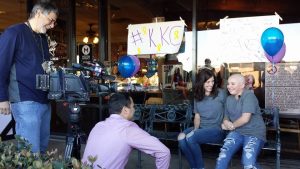 Last report we shared that Alex Kiker, an 11 year old girl, was cancer free. She was presented with her trip from Make-A-Wish Foundation a few weeks ago. She and her family spent a week in a bungalow that stands over the ocean! They literally could look straight down and see water!Alex continues to do well!

We also reported about Amy Donegan. Amy is a mother of 3 young children that was diagnosed with Lymphoma about the same time she found out she was pregnant with a forth child. Josh and Amy made the decision to delay chemo treatments until the baby was at least 6 months along. Lots of prayers and taking a homeopathic therapy was chosen instead of abortion.  When Donna and I went by to see them, in Mineral Wells, Amy shocked us with the news that her last Pet Scan had shown no cancer at all! Her doctor was amazed. Thank you, God, for this sweet blessing!

Ann Gazaway, Deonna Cates’ step mother passed away only a couple of days after we were able to help get her into Hospice care. Please remember Ron and the family in your prayers.

Last report we introduced you to Christopher Williams. He and his family were in a horrible roll over accident a couple of months ago. At the last writing Christopher had just been downgraded from critical to stable. The doctors had told his mother that there was probably irreparable brain damage. It is still to early 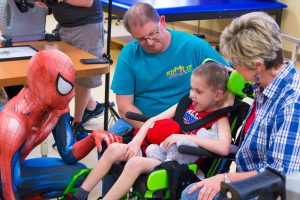 to tell but this little fellow is a fighter! He has improved from non-responsive to awake, and doing all of the following on his own: sitting up, eating talking, laughing, counting, singing, hugging and kissing and even a bit of walking! He still has problems with his vision but we are praying that time will heal this. He moved from Covenant Children’s Hospital to a long term therapy hospital in Lubbock about a month ago! With the help of our sons and some friends we were about to surprise Christopher with a personal visit from his favorite super hero, Spider-Man!!!

We should be hearing from the government about our non-profit status later this month. Please be praying this will be approved soon!

Thank you for reading our ministry report and supporting us in our endeavors to cast light in a dark world!